I don’t build a bunch of pow-wow drums, but I do love the challenge and the sound is amazing. Low, deep thunder with warm resonance and moving from center of the drum to the edge creates so many beautiful overtones.

This particular powwow is the largest I’ve built to date at 40″ diameter and 18″ tall.? The customer wanted to head this drum himself, so I only got to build the shell.? I never heard the final tone of this drum.? Hopefully when he finishes the drum he will get me a recording.

this powwow drum out of Aromatic Eastern Cedar, a traditional wood for Native American powwows.? The wood is soft and easily worked, has a nice smell (if you like the smell of a hamster cage) and has a naturally deep resonance.

My first challenge was its size.? I knew the 1″ boards I usually get would be too thin.? The walls of such a large diameter need to be thick enough to support the weight of the drum.? Even though cedar is light, this powwow drum weighed in at around 70lbs.? I looked for 2″ stock, but it was rather hard to find.? I ended up face joining the cedar planks so I would end up with a stave that was about 1.75″ thick.? This method turned out very nice, though it was a lot of work, and used a ton of clamps.

My next challenge was the number of staves used.? I wanted it to be as round as possible on glue up so there would be minimal material removal to round it up.? I opted for 45 staves, and knew this meant my bevel angle had to be perfect.? With 45 staves, and a bevel on each side, that’s 90 beveled cuts.? To make it more challenging the thicker staves required more accuracy because the glue up joint is longer…any little bit off and I’m going to have a lot of wood for the burn pile.

After lots of tweaking and tiny adjustments I was finally ready to glue up. I used some 16′ ratchet clamps to pull the staves tight and gave it 48 hours glued and clamped to dry.

Now I have a huge powwow form to sand down and smooth. I used a hand plane to round the shell’s exterior and level the top and bottom. Then I smooth it up with varying grit of sand paper down to 400 grit.? For the interior I went an extra step to insure a nice pure bass tone.? I roughed it out using a curved spoke shave, scorp, and a bowl makers adze.? After I finish shaping the drum I put two coats of boiled linseed oil. The oil really brings out the grain of the cedar and darkens it up nice. A week later worth of drying and I put on 4 coats of wipe on poly, but only to the outside to give a little extra protection and a bit of shine (bling).

I had to build a custom crate to ship this drum.? I’ve not done that before so it was almost as fun as building the actual powwow drum.? I used some cut up 2×4’s some 1/2 inch plywood I had laying around and some 1/4 inch plywood from Lowes.? I also used some thick weather stripping to pad the shell as I build the crate to be tight against the shell.? Total weight… 135 lbs. 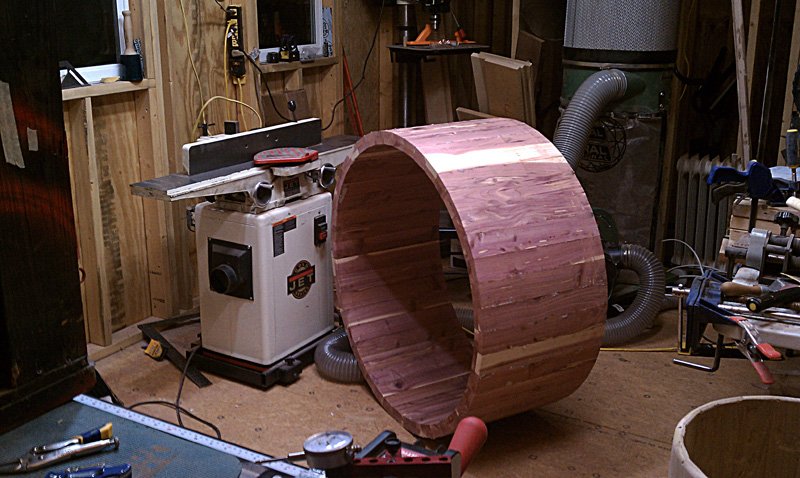 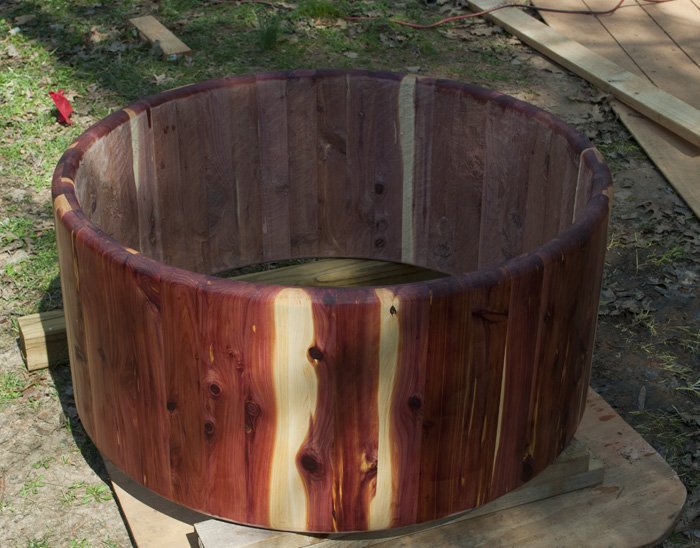 Admittedly… my blog archive is pretty weak.  I mean come on, my most recent post was in 2015.  I tell my stories through Instagram these days… with a photo here and there.  I had grand plans of writing about everything I build and sharing with the world.  But I’m just not that guy.  My passion is building drums.  I might update this page, might not.  But for now.. maybe one of these past posts will catch your fancy!